In your midterm feedback forms, some of you wanted to know how you’re doing so far. To that end, I’ve read and used Hypothesis to comment on all your project posts to date. For easy access, I made the annotations on the string of posts that appears when you click on your project under DH Projects on the course home page.

It was truly inspiring to read your posts consecutively and see how your ideas have come into focus, your design skills have sharpened, and your plans have developed. My hypothesis annotations try to pinpoint specific strengths, as well as to ask questions and suggest areas that need development or clarification.

I’m so excited about each and every project, and confident that you can achieve a DH scholarly website that you can be proud of, even with the significant challenges and obstacles that Covid-19 has delivered. We will all have to make adjustments, scale back our goals, and cheer each other on, but WE CAN DO THIS TOGETHER!

For the first two projects, I annotated while logged into the ENG 406 hypothesis group. These two projects can find their annotations by clicking on the relevant link below, activating Hypothesis, and logging into our ENG 406 group—easy peasy, lemon squeezy:

But then (brace yourself for the glitch news), I commented on all the other projects while logged into my ENG 220 Hypothesis Group! Agh! I committed the cardinal error I’ve warned you about many times. To see my annotations on the following group projects, you will need to join and log into the ENG 220-S20 Hypothesis group. I’m so sorry for the inconvenience! 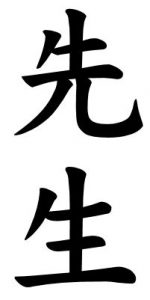 The Japanese “kanji” (left) represents the word “sensei,” or teacher.  In 2009, I attended a Japan Studies Institute, which included introductory Japanese. Our teacher, Linda Fujikawa, said that “sensei” literally means “been there, done that.” That etymology overturns the assumption that a professor is an expert or superior. A sensei is someone with experience, who understands what it feels like to be a student: to be curious and excited about an unfolding new field of inquiry, to be overwhelmed by complexities, to stumble and grope for skills and understanding. Trying to learn Japanese reminded me how it feels to be a student: it was exciting, overwhelming, and awkward. I’ve been there and done that. I’m a teacher.

My name is Suzanne Churchill (in this class, please call me Suzanne Churchill or Dr. ‘Chill, cuz I’m so chill). I’m excited to team-teach this course with Sundi Richard and to get to know you as as a whole person, both in and out of the classroom. I’ve been teaching at Davidson for 23 years. I can remember exactly how many years only because I landed the job at the same time I found out I was pregnant—with twins. Thomas and Luke have now graduated from college and are living and working in California and D.C., respectively. Their brother, Zac, is a first year at Tufts University. My husband, Matt, is an attorney in Charlotte, at a law firm that has a lot of English majors and opera singers turned lawyers, which makes for a wonderful, quirky corporate culture.

We live in an old house near the center of town, known to long-time residents as Dr. Wood’s office. College students used to be able to get a physical for $6, and Dr. Wood’s kindness and cough medicine were legendary. I like to think he’s the reason why our house has good karma. But I know that it also has to do with our neighborhood, which has a strict policy of well-used front porches, open doors, and free-range kids. Kids used to roam from house to house, while adults hung out together on the front porches and ignored them. Now those kids are old enough to hang out with us, which is even more fun.

Italian novelist, children’s book author, and semiotician Umberto Eco is well known in the U.S. for his best-selling novel The Name of the Rose. What’s not so well known here (yet) is  a little book he wrote for his students in 1977, called How To Write a Thesis. Now in its 23rd edition and translated into 17 languages, this handbook was finally translated into English in 2015. In it, Eco offers “Four Obvious Rules for Choosing a Thesis Topic,” rules that apply not only to master’s thesis in Italy, but to any academic essay you might be assigned at Davidson:

1. The topic should reflect your previous studies and experience. It should be related to your completed courses; your other research; and your political, cultural, or religious experience.

2. The necessary sources should be materially accessible. You should be near enough to the sources for convenient access, and you should have the permission you need to access them.

3. The necessary sources should be manageable. In other words, you should have the ability, experience, and background knowledge needed to understand the sources.

4. You should have some experience with the methodological framework that you will use in the thesis. For example, if your thesis topic requires you to analyze a Bach violin sonata, you should be versed in music theory and analysis.

You can find more of Eco’s advice to writers in Maria Popova’s review on BrainPickings.org.

Preparation: Grab a handful of different colored pens, pencils, and/or highlighters. Print out a draft of your paper. I don’t know why, but you can see your writing better—or at least differently—when it’s on paper.

I worked a little bit on developing my new crux, and this is what I have so far:

One Flew Over the Cuckoo’s Nest by Ken Kesey is regarded as an important spark in starting the American counterculture, an inherently secular movement. But the novel is full of Christian imagery and pushed forward by the Christ-like sacrifice of McMurphy more so than anything else; is Kesey’s work, thought to be a secular bible of sorts, actually driven mostly by McMurphy’s actions as a Christ figure?

I would love if you could take a look at this and let me know if you think I should start jumping ahead from here or if I should work on fine tuning it further.

This thesis is a good start. It takes the form of a crux by crossing a commonly held assumption with contradictory evidence from the novel. You can strengthen your crux by fortifying it against the zombies who run rampant in the current formation, feeding on all the passive voice.

To fend off the zombies, bring in some living, breathing people and concrete reference points. Instead of generalizing that the American counterculture is “an inherently secular movement,” give some precise historical context for this movement. Find an expert who says that it’s secular. You may find it difficult to find an expert on American counterculture, since that category is so broad. Why not narrow your focus to the Beats? Were the Beats a secular movement? I know they were interested in Eastern religion, but I’m not an expert. It shouldn’t be too hard to find an expert, though.

While we’re chasing zombies, which ones think One Flew Over the Cuckoo’s Nest is a “secular bible of sorts”? The notion of secular bible doesn’t contradict the assumption that American counterculture is secular, so this idea undermines your crux. Why not simply ask whether, with all its Christian imagery, the novel is actually delivering a Christian message?

Although you have a crux, its articulation “appeals to vague authority,” a logic flaw identified by Ali Almossawi in An Illustrated Book of Bad Arguments as when “an idea is attributed to a faceless collective”:

By eliminating passive voice and introducing relevant, specific authorities, you will achieve a strong crux.

You may not know this about me, but you should. I’m a big U2 fan, and I adore Bono. Sure, he has a big ego, but his commitment to making the world a better place is even bigger.  Medium Daily Digest today features this article on “Solar Fields, Sexist Poverty, and a Modern Marshall Plan” by Bono, which combines factual details, political analysis, and a distinctive personal voice.